SOLVES In Sight: Why Did WeWork Not Work?

The Downward Spiral of WeWork

Over the past few weeks, there has been a significant amount of pontification over the downward spiral of WeWork. By most indications, WeWork spiraled from a $47B valuation to talk of bankruptcy in just 6 weeks.1  At one time the US’s most valuable tech startup, WeWorks’ S-1 registration for an initial public offering (IPO) disclosed myriad conflicts stemming from conflicts of interest and mismanagement by its cofounder, Adam Neumann. It is said that at least Uber and other recent large IPOs offered some legitimate innovation in their business models even if their valuations were far too high (e.g. Theranos). WeWork seems to have copied an old business model, i.e. office leasing, slapped some tech lingo on it, and suckered venture capital investors into valuing the firm at more than 10x its nearest competitor.2  In this post, we’ll leverage the SOLVES™ methodology as the aperture to see what lessons might be gleaned from this case and how this might affect strategic decision-making.

What is the deep customer Story that defines the industry or arena that WeWork intended to explore?

To understand that is to understand the founder a bit better. Adam Neumann, was born in Israel and moved to New York City in 2001 after serving as a navy officer in the Israeli military1 . Initially, he owned a company called Krawlers that sold clothes with padded knees for crawling babies. This is where he met his future WeWork co-founder, Miguel McKelvey, a lead architect at a small firm in the same building. The pair saw the partial vacancy in the building and got the idea to open a coworking space for other entrepreneurs. The start-up was called Green Desk and debuted in 2008 as the predecessor of WeWork, now We. After selling Green Desk to their landlord Joshua Guttman for “a few million” 1 , Neumann and McKelvey started WeWork and concentrated on the Story of “Community as the Future of Work” 5 . And therein lies the Opportunity that would manifest itself later as WeWork.

What unique market Opportunity appears within this Story? This can be thought of as the opportunity to move customers “from A to B” where:

A = their problem or desire
B = the solution

The Opportunity for WeWork seemed to lie in its ability to maximize profits on the unused office space. On the surface, it seems that this Opportunity still exists. However, it also seems that the management of the opportunity may have simply been botched by the original founders. The obvious question becomes how did WeWork create a profit. 9

WeWork is simply an office-leasing company.8 It makes money by renting office space. WeWork purchases real estate space—sometimes just a floor or two in an office building—and transforms it into smaller offices and common areas. It rents desks to individuals or groups who want the benefits of a fully stocked office without the expense of a full office. Members include independent freelancers and remote workers who need an occasional office away from home. They may want unlimited Wi-Fi to focus on a deadline. Other customers are small businesses with multiple employees who need a consistent place to work, have meetings, and build their budding empires, but without the high cost. However, those leases didn’t come cheap. The company reported long-term lease obligations of $17.9 billion in its IPO filing, a number that is likely to increase as the company continues to expand globally.

What resources available to – or unique to – your organization or team (including “technology mosaic”) can you Leverage to address this Opportunity?

As of 2015, WeWork’s 30,000 clients ranged from startups to big companies like Merck and American Express. Individuals could also buy packages starting at $45 and rent a desk for a day. The Leverage of the WeWork model became very evident to the founders. Unused space was relatively plentiful and WeWork expected to take a profit from that unused capacity. 9 You don’t need to look far to understand how detrimental real estate expense can be to a business. Look at your local bodega or local bookstore that can no longer afford rent. One of the biggest financial questions people ask themselves is whether to rent or buy. WeWork’s attempt to Leverage real estate in its business model proved one thing clearly: real estate is still a meaningful problem.

As the details have been uncovered, WeWork’s business model had its critics several years earlier. In 2015, it settled a dispute over its custodial services. And though WeWork became profitable as of summer 2015, some skeptics believed its financials did not support its valuation, suggesting it could be part of a new technology bubble. This led to basic concerns about the sustainability of its business model. WeWork, of course, has been an alternative to real estate companies for freelancers and companies.

Using the Leverage of its resources, what Vehicle did WeWork create to help customers get from “A to B”? The “Vehicle” created would ultimately become their new M.O. (Market Offering).

The Vehicle for WeWork was clearly unused real estate. WeWork rented out office space in cities all over the world and even became the biggest tenant in New York, Washington DC and London. Early in 2019, the company was estimated at $47B. A lot of would-be competitors took notice and began operations of their own but WeWork had already become the 800-pound gorilla of the marketplace. 6  Their first mover status enabled them to take advantage of the unused office spaces all around the world. Its name was synonymous with coworking.

As of October 31, 2019, the company has been valued at only $8B and their primary investor, SoftBank Group Corp., had to inject $1.5B into the company that was said to be weeks away from running out of money. As a result, a slate of governance changes went into effect including the replacement of co-founder Adam Neumann as chairman and the assignment of five board seats to SoftBank, which will take a majority stake. WeWork also said it appointed a new independent director to the board, Jeff Sine, co-founder of financial firm Raine Group.

What Exploration did they do to test the new “M.O.” (Vehicle) with customers or within the market? Did the vehicle help them “get from A to B”?

There seems to be 4 key perspectives to consider understanding how WeWork committed to the Exploration of the marketplace. 10

Overall, the exploration strategy was one of great aspiration but as explained in the Leverage section, real estate is still a meaningful problem. However, it seems that this could also be an issue of the execution of exploration vs. a bad business model. Following the filing of the S-1, it seems clear that Neumann and his wife Rebekah were interested in many non-core efforts including an elementary school and running the event-planning website Meetup.com. 11  Those efforts of the now ousted Neumanns seems to indicate that the couple was not equipped to manage the balance of those Vehicles along with the behemoth that was WeWork. That said, under its new co-CEOs, Artie Minson and Sebastian Gunningham, WeWork has been crafting plans to sell or shut down those side ventures. The new management will focus on its core business of leasing office buildings, renovating them and subletting to short-term tenants. A question one might ask is whether Meetup.com was indeed a typical cash-hemorrhaging, passion-driven side venture or a reasonably good investment that might’ve paid dividends later, if on its own merit.

How did WeWork produce or provide a new Vehicle (M.O.) at Scale?

It’s been made fairly evident that the ‘perception’ of the historical Scale could only be described as awesome. WeWork is basically a real estate company valued like a tech company. WeWorks specializes in rent arbitrage — leasing and developing properties at one price, then turning around and renting them out at much higher prices. 12  Its run-up in funding — raising some $4B in 2018 alone — had given the company the firepower to expand quickly without worrying too much about fundamentals.

Companies traded in public markets that follow the same business model trade at much lower sales multiples than WeWork. Detractors often stated that WeWork should attribute its Scale of valuation by putting hipster touches on formerly drab spaces and positioning itself as a startup incubator, then charging sky-high rent. That said, the reality of a company attaining Scale doesn’t always translate to sustainable Scale.

This has been made clear by recent events. As of late, WeWork has been planning to cut thousands of employees. 4 They delayed the layoffs earlier in October 2019 because it couldn’t afford the severance costs, people familiar with the matter have said. A big aim of these moves is to pare down WeWork’s cost structure now that it will have to make do, at least for now, without the $3 billion or more the IPO was expected to bring in. Maybe in the near future, we’ll find that the new management team will find a way to reposition the company to enable sustainable Scale within the real estate industry.

The Story of WeWork is a cautionary tale. However, it’s founders’ ability to recognize the Opportunity in rent arbitrage is worthy of recognition. The Leverage of selling its first company Vehicle, Green Desk, seems to have placed them in the financial position to having already gone through the Exploration phase once on a relatively small scale. The Scale of WeWork could become an analytical question surrounding the proper execution of Scale. We’ll find out soon enough if the business model is viable on its own merits as the founders are replaced with what shareholders consider more capable management.

The impact of the WeWork Story should be recognized as 1) execution matters, 2) focus matters, and 3) governance matters. The overlay of the S.O.L.V.E.S. methodology to this SOLVES In Sight case should enable the reader to analyze their own corporate activity in a way that ensures that sustainable Scale is met, ensuring a successful attainment of corporate strategic goals. 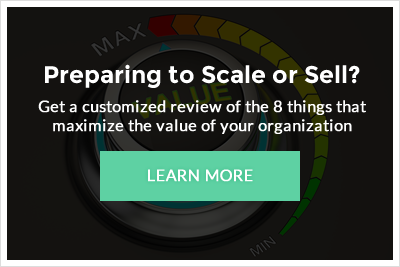